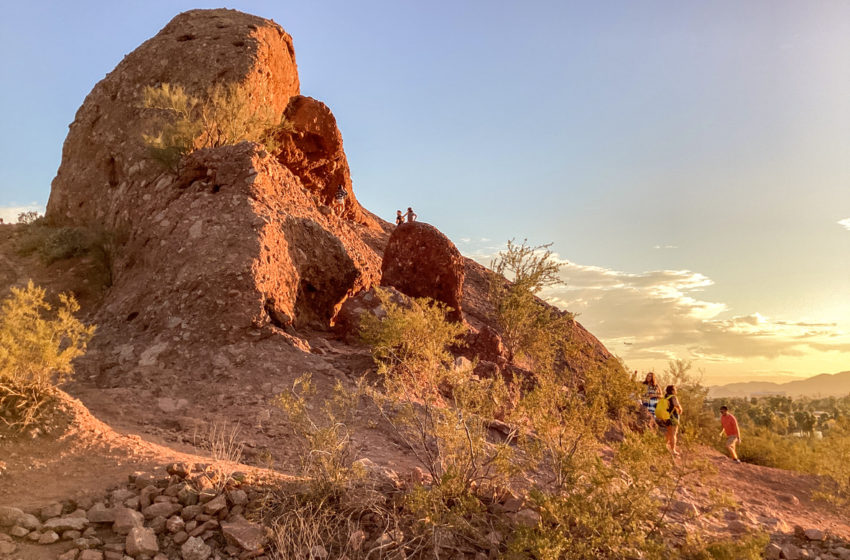 Phoenix, AZ, USA – December 4, 2021: Each evening a crowd gathers to watch the sunset at Hole in the Rock, Papago Park, Sonoran Desert, Arizona. Hole-in-the-Rock is a series of openings eroded in a small hill composed of bare red arkosic conglomeritic sandstone. The chamber provides a good view of the city of Phoenix west of the park. The Hole in the Rock trail is located in Papago Park and has free parking areas and restrooms at the base of the butte. It is a .2 mile hike to the top on loose gravel and a rocky path.

Construction of a hotel, restaurants and a grocery store is about to get underway. The developer is finalizing a lease with Sprouts to take the grocery space, said Lee Mashburn, president of Pivot Development, the company behind the redevelopment project.

While the longtime commercial site near Scottsdale and McDowell roads has a new look, the Papago Plaza name remains. And the metal Kachina from the old sign will be used in a mural in the new project, which will have six murals total.

Alliance Residential is nearing completion on a 276-unit apartment complex, called Seventyone15 McDowell, and has begun leasing on the property, Mashburn said.

Groundwork has begun on the hotel, a Marriott Springhill Suites, and framing for the building will be starting in the next week. Supply chain issues have delayed the delivery of steel, so Pivot Development is waiting on the steel delivery to begin vertical construction on the retail building.

The company has gotten more interest in leasing retail space at the plaza than there is space to accommodate tenants, Mashburn said. Now, about 80% of the retail space has leases signed or letters of intent out with potential tenants.

Companies with leases in place or in negotiation include:

Pivot Development is planning a drive-thru restaurant at the corner of the property and two other restaurant buildings along Scottsdale Road, separated by a grassy park area with outdoor dining, fountains and a fireplace.

How the project has evolved

Developing the project through the COVID-19 pandemic has made the process longer, Mashburn said, and changed some plans. The group had been working with German grocer Aldi for the grocery space there, but now the location is planned for Phoenix-based Sprouts.

Mashburn said the company has listened to the community and worked to incorporate community desires into the project. The biggest request has been for a high-quality grocer, followed by open green space. Each restaurant space has outdoor dining, and alcohol will be allowed in the grassy area. The internal driveway through the development also can be closed for special events, he said.

The hotel is planned to open in summer 2023, and the Sprouts store will open in late 2023 or early 2024. Other retail and restaurant tenants are expected to move in beginning in the second quarter of 2023.

Papago Plaza is across Scottsdale Road from SkySong, Arizona State University’s innovation center, and Mashburn said the redevelopment of SkySong, which had been a shuttered mall, was what brought Pivot to the site in the first place.

The developers of SkySong, Plaza Cos. and Holualoa Cos., are gearing up to build the sixth and largest office building on the site, at the corner of Scottsdale and McDowell roads.