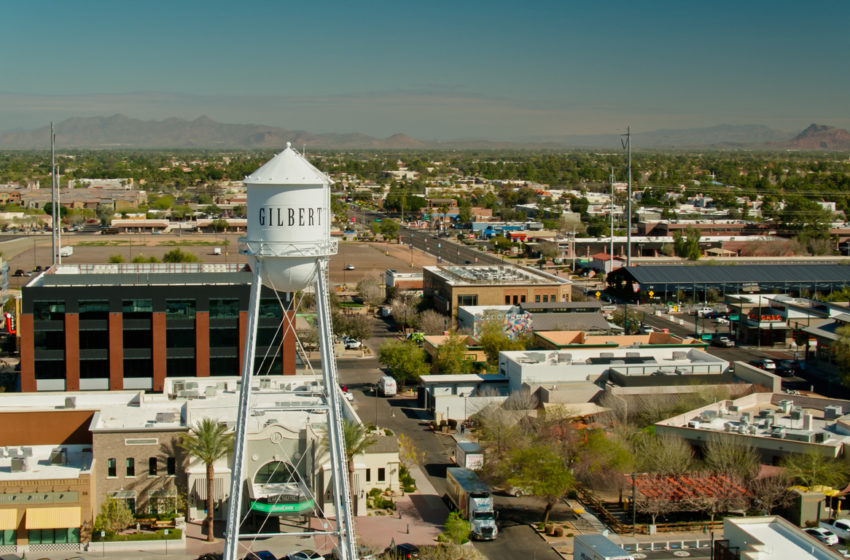 Aerial shot of Downtown Gilbert, Arizona on a clear sunny day Authorization was obtained from the FAA for this operation in restricted airspace.

A plan for a 40-acre vacant field near Mercy Gilbert Medical Center aims to “create something different, unique and special,” a representative for the developer said.

Indiana-based Thompson Thrift, which has several other projects around the Phoenix area, is proposing a mixed-use project that will include a grocery store, apartments and restaurants surrounding public open space on the site, at the northwest corner of Val Vista Drive and Germann Road.

The project, called the Gilmore, includes 194,000 square feet of new commercial development, along with about 300 apartment units.

Adam Baugh, partner at Withey Morris and zoning attorney for the project, said the apartments will include loft units built above some of the commercial space toward the center of the development and a standalone apartment complex on the northwest corner.

The Gilmore is close enough to SanTan Village that it must differentiate itself from other outdoor retail centers so it does not cannibalize on business already in the area and compete with its neighbors, Baugh said.

“We have outdoor courtyard plazas, and we want to give people a reason to linger longer,” Baugh said. “To get them to linger longer, we have different courtyards with restaurants around them, have some energy in the open space.”

The two outdoor courtyard plazas, called the “Gilmore Quad” and the “Vista Quad,” total about 24,000 square feet of space and will be designed to include outdoor dining, gathering and programmed events.

The Gilmore is planned to have a grocery store, but the brand has not been announced. Baugh said the store would be a grocer that is “unique to Arizona, not a typical grocer.”

From Val Vista, the plan calls for an entryway lined with trees and lighting to create a “main boulevard” effect, Baugh said. The entry will lead to one of the courtyards, which is planned to be surrounded by restaurants with rooftop amenities such as bars or patios.

The site is located in Gilbert’s height overlay, an area the town has identified as a spot to encourage taller, more intense development, Baugh said.

The only similar project in the town, with a mix of uses integrated throughout the property, he said, is the Epicenter at Agritopia, which has restaurants, stores and other businesses on the ground floor of apartments, integrated within the larger Agritopia development.

The project is scheduled to go before the planning commission in July and to the Gilbert Town Council in August. The Gilmore is mostly planned to be built in one phase, except for a parcel on the southwest corner of the site, west of the grocery store, which is planned in a later phase for a mixed-use building.

“A lot of East Valley shopping centers all look the same,” Baugh said.

“Retail is much more difficult to be successful today, so you’ve got to give people a reason to stick around. I’ve been doing this for 16 years, and you don’t get many chances to pull off something like this.”